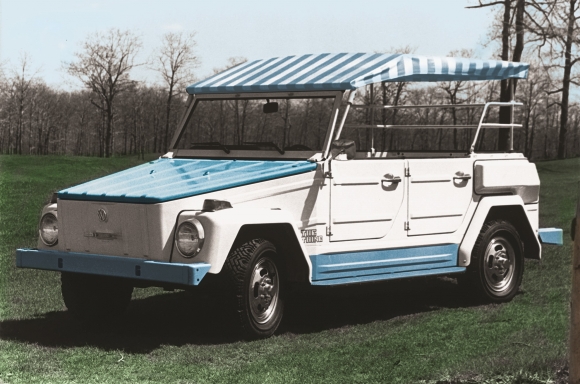 The Volkswagen Type 181 – commonly referred to as “The Thing” – has always been a fun summer classic for drivers who enjoy a cool and wildly original type of ride. The removable doors, retractable soft top and folding windshield provided a driving experience unlike any other Volkswagen. The 181 has also spawned one of the more unusual models ever to wear the Volkswagen badge – the Acapulco Thing.

The Thing variant was specifically designed for two legendary, high-end resorts in Acapulco, a popular resort city in Mexico and destination du jour for Hollywood A-list celebrities in the 1960s and 1970s. As the Thing was assembled in Puebla, Mexico, the oceanfront hotels used the boxy beach cruiser to shuttle wealthy vacationers from the airport and the city’s sun-kissed shoreline. The Acapulco Thing’s popularity among the hotel’s ritzy, jet-setting clientele led Volkswagen to produce a limited run of the resort cruiser – about 400 cars in total – from May to July of 1974.

The Thing was powered by a rear-mounted air-cooled 1.6-liter flat-four engine, paired to a four-speed manual transmission.