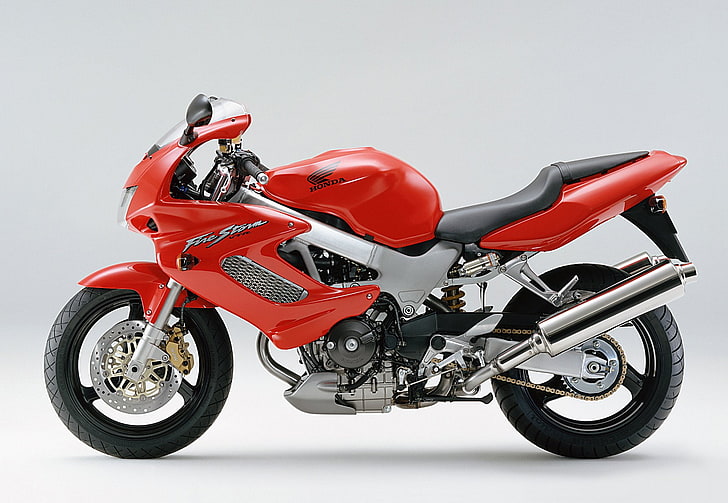 The Honda VTR1000F Firestorm aka Superhawk was made by Honda in 1997 and sold through 2005. The versatile V-twin powered motorcycle was made to challenge the dominating iconic Ducati 916 V-twin on track as well as a asphalt. The Honda Firestorm led the Japanese V-twin entry alongside the Suzuki TL1000S and TL1000R.

Honda Firestorm was powered by a 90-degree V-twin engine 110bhp and 71ftlb of torque. The V-twin provides tons of usable power and torque across the whole rev range. Power delivery is smooth and it’s predictable manner makes the liter- class beast an excellent city commuter.

Firestorm’s 90-degree V-twin engine produced 110bhp and 71ftlb of torque when it debuted in 1997. The V-twin offers smooth delivery, and plenty of low to mid-range grunt.

Firestorm equipped with track derived suspensions and braking systems improved the quality of ride and comfort levels. Long hauls were pretty impressive while the windscreen and fairing offers exceptional weather protection. Handling, cornering and comfortable riding position were other plus points of the Superbike.

Braking is provided by twin 296mm discs with Nissin four-piston calipers at front and a 220mm single hydraulic disc with a single-piston caliper at the rear.

It was only updated once during its lifetime, in 2001, with a larger capacity fuel tank, LCD display, and updated suspension. The top speed of the sports V-twin is 244 Kmph. This fantastic all-around bike is still a hot seller on the used market.